For the third year in a row, Goshen High School has earned a silver placing on the U.S. News & World Report’s list of the best high schools, this year, ranking as the 29th best high school in the state of Indiana. 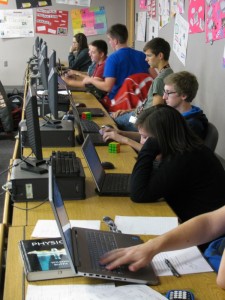 U.S. News & World Report ranks high schools by looking at schools’ reading and math scores on state standardized tests and comparing those with how students in that state are statistically expected to perform, also factoring in the percentage of economically disadvantaged students and if those students perform better than statistically expected. Schools scoring high enough in that part of the process then go on to step two where U.S. News & World Report looks to see if the school’s least-advantaged students (black, Hispanic and low income) are performing better than the state average for those groups of students. Schools performing well enough there are then judged on college readiness performance, either through success with Advanced Placement or International Baccalaureate.

Schools doing well through all three steps are assigned a gold, silver or bronze award and then sorted into national and state rankings.

Find out more about U.S. News & World Report’s analysis by clicking here and about the ranking’s looks at Goshen High School by visiting here.