In 12th/Under, Goshen High School had one team, and they finished 17th of 27.

Goshen Middle School had two teams in 8th/Under. Our “A” team finished 4th of 35 teams. This was our best result, and was really a very good effort. The match they lost was to the eventual champions, but it was a very good day for them. Our “B” team in that division finished 23rd. The “A” team was Matthew Snyder, Daniel Elizalde, Sam Kreps-Long, and Cole Johnston. 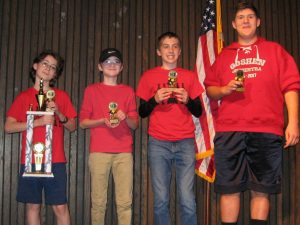 Finally, we had 4 teams in 3rd/Under. Parkside just missed a trophy on tiebreaks, finishing 12th of 54, Prairie View was 21st, Chandler was 35th, and Waterford was 37th. 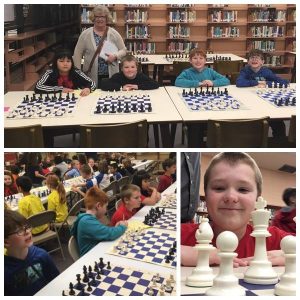 Individually, Daniel Elizalde, an 8th grader, had the best results on the day, winning all 5 of his games. Cole Johnston had a good result, too, winning 4 and drawing 1.

In the 6th/Under division, Quinn Shreiner Landes (Chandler) won 4 of 5, and Mira Yoder (Parkside) won 5 of 6 in 3rd/Under.

Although it may not have been Goshen’s most successful state tournament, it was still a great day. The kids behaved well, they were where they were supposed to be when they needed to be, and the students never caused any problems or disruptions for the team coaches. Thank you to our students for being such great representatives of Goshen Community Schools!

Congratulations to all of our GCS chess participants: