Goshen Community Schools (GCS) is pleased to announce that Goshen High School (GHS) Engineering & Design Technology teacher, Mrs. Jen Yoder, has been selected as a “Top 10” finalist for Indiana Teacher of the Year! As a Top 10 finalist, Mrs. Yoder will go to Indianapolis on August 10 to interview with a panel composed of 10 former INTOYs, Indiana Department of Education staff, and other stakeholders. 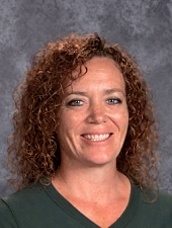 Jen Yoder was hired in 1998 as a GHS Special Education teacher. In 2017, she moved to Engineering Technology. Since then, Jen has taken steps to grow the Engineering department by starting a Technology Student Association, by running an @GHSEngineerTech Twitter account, by publishing a monthly STEM newsletter, and by offering a STEM summer camp. Additionally, Mrs. Yoder has been a GHS teacher leader as an Instructional Technology Mentor and a Mentor Teacher in the TAP System for Teacher and Student Advancement.

According to Morgan Chupp, GHS class of 2020, “Mrs. Yoder has been an important person in my life who has influenced me to be where I am today. I met her in my freshman year and continued to take her classes, and even have independent study with her because of how much I enjoyed her teaching and classes. Mrs. Yoder was the first person to introduce me to the field of Engineering and Architecture, both of which I really enjoy. Mrs. Yoder has influenced me on many things, and I will take what I have learned from her with me in my journey at college.”

Mrs. Yoder offers yearly projects, like the Pumpkin Drop and the Cardboard Boat Race, that draw students to her classes. In addition to the favorite yearly design projects, Mrs. Yoder has her students collaborate with the City of Goshen on projects or problems that the city encounters.

Perhaps Mrs. Yoder’s most beloved school project was a small calf named “Daisy RedHawk”. Daisy entered the world on April 13, 2018, on Don and Nancy Shaum’s farm in Elkhart. The Miniature Hereford calf wasn’t just any calf; Daisy was born with significant bone deformities in all four of her legs and had only one digit per foot, instead of the normal two-digit hoof. Although newborn calves are often clumsy, the vibrant spirit of this calf and her gritty determination to move and thrive despite her challenges was undeniable. Through a collaborative effort with the Shaums, veterinarian Dr. Emilie Blough, and Mrs. Yoder, Daisy officially became a Redhawk on April 16, 2018, and permanently secured her life in the hearts of GHS students and staff. 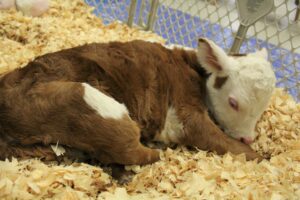 GHS biology students worked to understand the genetics behind Daisy’s condition, and technology/design students began to engineer mobility solutions which would provide stabilized weight bearing and support for Daisy’s limbs. Mrs. Yoder changed the course of her class plans for the end of the school year to take a risk on the implementation of a very non-traditional teaching approach.

“Daisy was for the community member who thought school was taught the same way it had been 20 years ago but learned that education is now a real-world experience. Daisy was for the student who struggled to get to school, but suddenly started showing up early to spend a few minutes with her before class. She was for the professional orthotist who was willing to try something new for a species she had never treated. She was a living reminder that sometimes when it seems grim, pouring your energy in and going the extra mile is 100% worth it.”

GCS superintendent Dr. Steven Hope said of Mrs. Yoder “She is a fabulous teacher who makes the entire community her classroom. She finds relevant, real-world problems for her students to tackle, and guides them in solving those problems while making meaningful connections.”

GCS would like to publicly congratulate Mrs. Yoder upon her honor as a Top 10 finalist for Indiana Teacher of the Year. This is an affirmation of the incredible instruction that Jen, and other GCS teachers, provide for students every day!