Goshen High School has two 3D printers that the school’s engineering classes and clubs use to create parts. Students use computer-aided design (CAD) software to create a three dimensional model of a particular object. The computer can then be connected to a 3D printer, feeding the machine the information to create the item. The school’s 3D printers release lines of hot plastic to slowly build up the shape of an object. The technology is used in numerous industries today.

While students most often use the 3D printers for class assignments or projects, two students recently used the process to help make one Goshen High School students’ life a bit easier. Seniors Evan Smith and Nick Truex were in teacher J.J. Johnson’s classroom one day when one of the school’s paraprofessionals spoke to Johnson about an issue a special needs student was having. That particular student used a gait trainer, a wheeled device similar to a walker, and had received bruises on the back of her legs from her backpack knocking down the fold-out seat on her gait trainer, which would then strike the back of her legs as she walked.

Because Smith and Truex were there at the time, they took on the challenge of designing and creating some way for the student to keep her backpack on her gait trainer without it compromising her movement. The two boys came up with an initial design that same day, Smith said, but continually tweaked and improved it for about two weeks, until settling on their final product. The students designed clips that could be screwed onto either side of the back of a gait trainer and then hold a rod in place. The student’s backpack would then rest against that rod instead of swinging in towards the student’s legs.

Smith said that it was fun to be able to work on a project outside of classes or work he does for the high school’s Super Mileage team, which designs energy-efficient vehicles for competitions. “It’s a little more exciting,” Smith said. “You feel more involved with an outside-of-class assignment.” Smith plans to attend Rose-Hulman Institute of Technology in Terre Haute after graduating from GHS to pursue a degree in mechanical engineering. 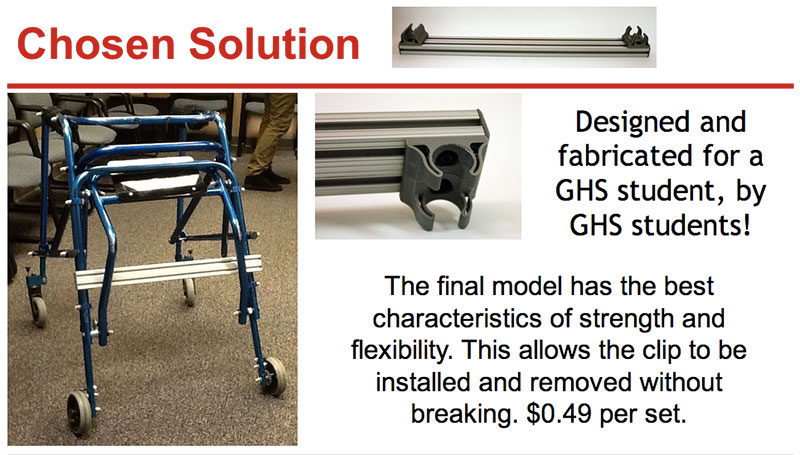 GHS’ wrestling coach, Jim Pickard, had talked with juniors Jonathon Hill and Ryan Meade about how he had photo frames hung on nails that would fall off the walls when people bumped against them. The students went through the design process, developing a piece that now works to hold the photos in their frames steady against the wall.

Johnson, a GHS engineering technology teacher, said that he would love to have more 3D printers for students to work with and for more staff to suggest items they could have the engineering students make.

“That is going to grow kids’ experience that will also be impactful for them,” he said. The 3D printers are also a major draw for bringing students to the class, he said.

Johnson has been able to work with a local company, SeeMe CNC, which builds 3D printers, in bringing the technology into his classes.