Engineering classes from GHS and Fairfield competed to see who could successfully build a vehicle capable of sustaining a 50 foot fall, protecting their passenger (a pumpkin) from injury. The rules and goal of the assignment are below. The Goshen Fire department provided a ladder truck to achieve the 50’ drop height and a championship round 102’ drop height. There were 20 teams of students competing – 12 teams from Goshen and 8 teams from Fairfield. 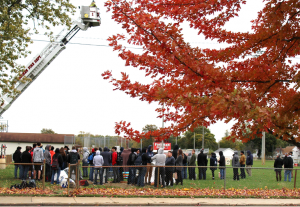 Surviving the 50’ drop were 6 teams from Goshen and 1 team from Fairfield. Those 7 teams then proceeded to the next round which was the 102’ drop. None of Fairfield’s teams survived that round, while Goshen had 4 of their 6 finalist teams survive. 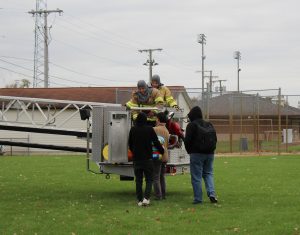 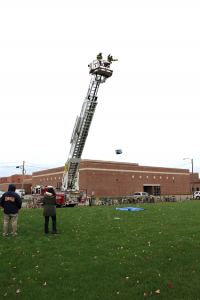 Dropping the enclosure (this is from 50′). 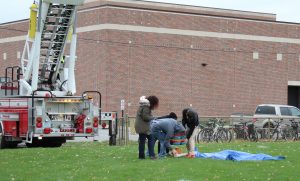 Checking to see if the pumpkin survived.

The names of the 102’ drop winning team members are included below:

The goal of the pumpkin drop competition is to design an enclosure or apparatus to protect a pumpkin from damage when dropped from the bucket of a fire truck 50 feet high. Entries that survive the 50 foot fall will then be dropped from the maximum height of 80-100 feet.

Ed Ernstes from WBST News was there to cover the Pumpkin Drop. He will air the story at around 6:15-6:20 this evening on WSBT News.

Thank you to Jen Yoder, Industrial Technology teacher, who coordinated the logistics of the Pumpkin Drop, and to the City of Goshen for the use of the fire truck and the cooperation of the firefighters. What a great opportunity for students to put their design ideas to the test!