Zoe, who is now finishing her junior year, was elected by the student body in an election held Thursday, May 16. She won in a close race with her fellow candidates, Simon Hertzler Gascho, Dylan Steury and Joseph Narayan.

Current youth adviser Felix Perez Diener will continue to serve with the City Council until early June, at which time Zoe will be sworn in as the newest member of the council.

State law allows mayors to appoint a person younger than 18 years of age to serve as a non-voting member to the council and as an adviser on matters concerning the youth. Mayor Jeremy Stutsman has instead encouraged Goshen High School to elect a student to represent them and all the younger constituents in the City. Junior high school students are elected in the spring and serve for a year with the council as a non-voting member.

Since its first planning in 2015, the Elkhart County Voter Registration Office, Goshen Community Schools and the City of Goshen have collaborated to hold elections at the high school.

Below: Mayor Stutsman and Zoe Eichon pose for a photo. 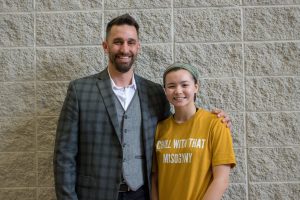 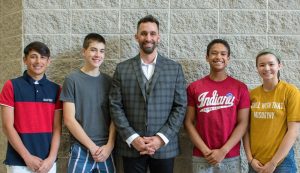