See photos of the our day here.

Today is beautiful yet again, however we have a very nice breeze which keeps the heat down a little bit.  I’m a bit nervous to even admit that considering weather reports back home suggest snow today for Goshen.  To make all of you feel a bit better I will let you know about the amazing scent that permeates the air here.  As Dylan Steury has told his mom, Michele Fanfair Steury, “You know you are in the Keys when you smell that!”  The sea grass that decomposes along the edge of the sea wall causes the most “awesome” smell of methane you can imagine.  Some days it’s not very noticeable however today because of the wind working sea side is pretty stinky.  The other day I saw a T-shirt that said, “You smell like low tide!”  Quite appropriate for down here. Despite the smell, and honestly it’s not that bad most of the time, working here is amazing.

Yesterday the students worked on their field studies which will be presented today, Thursday, at 4:00pm.  It’s crunch time as all work needs to be completed before we leave Friday morning.  Some have been keeping up, but there are always some procrastinators.  Shocking I’m sure! :)

Second year students spent the day at the Coral Reef Restoration project in Key Largo with Alex Neufeld, a GHS Alumni.  I haven’t had the chance to talk to anyone about their experience up there, but hope to later today.

The chaperones and kids went out to John Pennekamp to experience the reef.  It was pretty amazing seeing the more colorful fish and coral that lives out there compared to that living off of the resort.  Because the resort water environment is grassy and muddy, the fish that live there tend to be less colorful so they can blend in.  It’s been a great learning experience.

The afternoon was filled with trips to The Turtle Hospital in Marathon.  The place is amazing.  We learned there are 7 species of sea turtles and that 5 live in this area.  At the time of our visit there were only 4 there.  Green, Loggerhead, Hawksbill, and Kemps Ridley.  The Leatherback are not typical patients of the hospital.

Turtle patients come to the hospital when they get calls from people like you and me who have found them stranded or sick.  You can tell a turtle is sick if they are floating on the water or have a lot of barnacles on their shells.  Some amount of barnacles is common, but having a lot means they are not swimming and diving much.  Those that find and call in the turtle rescue get to name it.  Hence the really odd names they have there:  Smelly cat, Little Fat Briana, George (which is a girl), Poppy, Tippy, Chuck Norris, Franco, Bubble Butt.  This list goes on as there are 47 turtles currently residing there.  Some are permanent residents while others are there temporarily.

To be released as a turtle you must have at least 3 working flippers and 1 eye.  For a few turtles, this has held them back. Shark bites, boat propellers, and other accidents have led them to multiple amputations and poor eyesight. Without flippers they can’t dive and swim.  Another reason that a sea turtle cannot dive is if they have “bubble butt syndrome” which is what happens with a turtle gets hit by a boat or something else which causes a deformity in their shell.  The syndrome was named after “Bubble Butt”, who is a permanent resident at the hospital.  You can immediately tell a turtle has this because they cannot dive and they have a very conspicuous lump on their shell sticking out of the water.  These turtles also have air trapped in their muscles resulting from their impact with the boats.  The hospital has tried many ways to release them of this air, but have not been successful.

Last night we had yet another amazing meal of hamburgers, brats, and numerous salads.  I’ve been so impressed by the meals prepared here.  We are very blessed to have such an abundance of food.  After the meal we had the annual group photo.  Because we had such a large group this year, 163 people, we took a few smaller group photos as well as the big one.  Below you can see us in our lavender shirts. 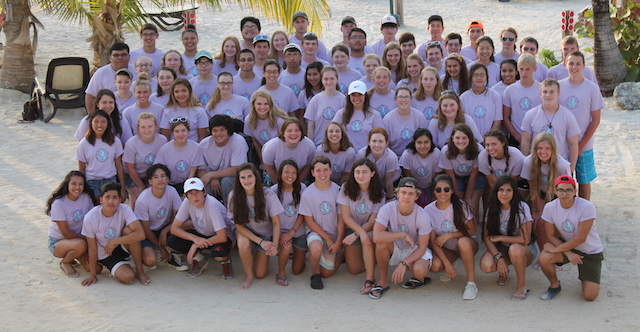 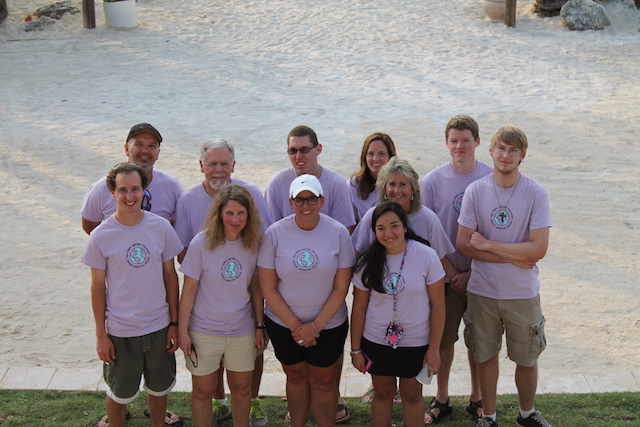 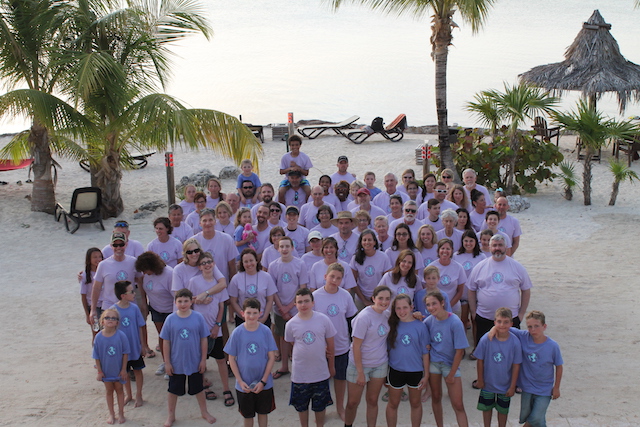